University West located in Trollhättan, Sweden, is a modern university offering vocationally-related courses in a attractive study environment. The university is focusing on work integrated learning which permeates the work and profile of the University West. The University has more than 13 000 enrolled students and over 650 employees and offers 26 undergraduate programs and 16 programs at advanced level, where 86% of all students are working after one to one and half year after graduation. In addition, the University offers study programs, second cycle programs and a variety of courses in computing and IT, economy and leadership, health and care, teaching and languages, media, as well as technology.

Magnus Sandberg, Team leader and Coordinator for the Support department and Administration department at University West, says they introduced a new model for receiving visitors two years ago. Previously there were about eight support departments, such as the student center and the communications department. Now there is one service center for all visitors, students as well as external visitors and the general public. This is where students and visitors for instance go to ask about exams, get help with finding their way around the university or get help from the janitor. With the introduction of
the new service center, University West found that the pressure of visitors was increasing, and when they did not have a queue management system, all the visitors came into the service center and thronged around the counters, which was extremely stressful for the staff. When the start of the autumn term was approaching and several thousand new students were about to start their studies, the University realized it needed a system for organizing the flow of visitors and making the work of the staff easier. 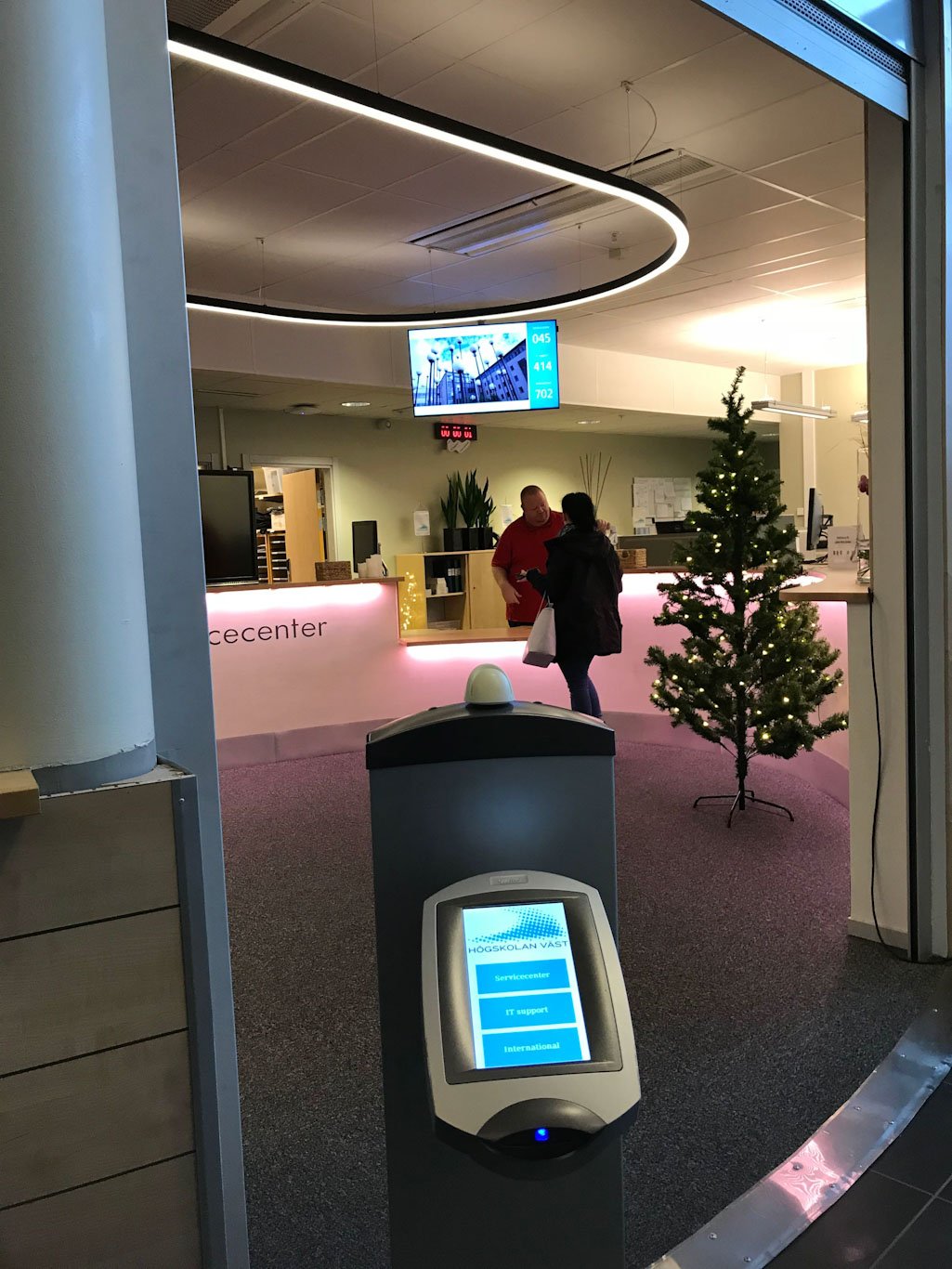 "I thought the solution from Qmatic was best suited to our needs, and it felt really professional right from the start. We didn‘t know exactly what we were looking for. For that reason it‘s a great advantage that the Qmatic system is web-based and flexible. For example, we added staff displays later on.“

During the start of the autumn term, University West noted a definite positive difference, especially for the staff. With a queue management system from Qmatic, students and visitors can now wait for their turn in peace and quiet outside the service center, and see clearly on the displays when it is their turn to go forward to the counter. At the same time, the staff have the system on their computers and thereby have full control over the flow
of visitors. University West‘s experience with Qmatic's system has been extremely positive. "It works immediately, the queues have become shorter and the atmosphere is less chaotic,“ said Sandberg. He also mentioned that during their regular meetings they look at the statistics gathered from the Solo platform. "At the start of the autumn term, for example, we could see that 4 000 tickets had been printed during the first two to three weeks. That was more than we‘d expected," stated Sandberg.

If Sandberg would act as a reference to a potential user, he would above all emphasize the value of having full control over the flow of visitors and the advantage of the extension functionality, "We started with the ticket printer and two screens that you can put up anywhere, then we added a staff display. You can start with a simple system and gradually extend it. That felt right for me,“ Sandberg ends.

“I thought the solution from Qmatic was best suited to our needs, and it felt really professional right from the start.”

University West in Trollhättan, Sweden is a modern university that offers education collaborating with work-life in an attractive and modern study environment. The University's mission is to provide an excellent education and conduct high-quality research. The university specializes in Work Integrated Learning (WIL) and one of its overarching goals is to be Sweden’s leading university in this field.

See how the City of Minneapolis Service Center made its services more equitable and accessible to the public with Qmatic.
Learn more

The city of Ninove took help from Qmatic to get rid of crowding and queues and attain social distancing at their Covid-19 vaccinations center.
Learn more